How to make a 3D animation

It comes as no surprise that 3D animation puts a bit of a spanner in people’s brains when it comes to understanding how it all actually works. I myself am still baffled at the amount of steps it takes to create a fully animated scene - a 5 second shot could take up to a few months to create. Yes, you heard that right. And yes, that sounds insane, but this is why this article exists: To demystify the reason why 3D animation is so time consuming and why it is one of the most expensive animation styles out there.

3D animation has only been around for a couple decades, having been properly adopted by Pixar in the 90’s with the pioneering Toy Story. It has been one of the fastest growing visual mediums since, alongside the rapid development of computers and technology that we’ve all been witnessing. Nowadays, the programs used in 3D animation have become widely accessible, making it possible for more artists to create stunning visuals.

So how does it all actually work?

To understand 3D, you must first understand the rules of this magical pixel world. Let me walk you through the basic concepts.

Every project starts out with a scene, which is your 3D world. This is where characters, objects, lights, cameras and SFX elements live. The world has a centre point, from which it stretches to infinity, and it is split into 3 axes: X, Y and Z - your 3 dimensions.

Everything in 3D that has substance - so objects, characters, and anything that is not a VFX particle (rain or fog for example), is made up of 3 things: vertices, edges and faces.

Vertices are a series of points that make up the object. Two vertices that are connected form an edge, and 3 edges (or 3 vertices) form a face. Most faces in 3D have 4 edges though, as it makes it easier to add textures uniformly (we’ll get to this later). Sounds complicated, but the only reason they exist is really to give us the option to edit our objects.

This is Blender’s Suzanne, the monkey (she is a bit of a legend in the 3D community). You can see how the vertices, edges and faces define the model. 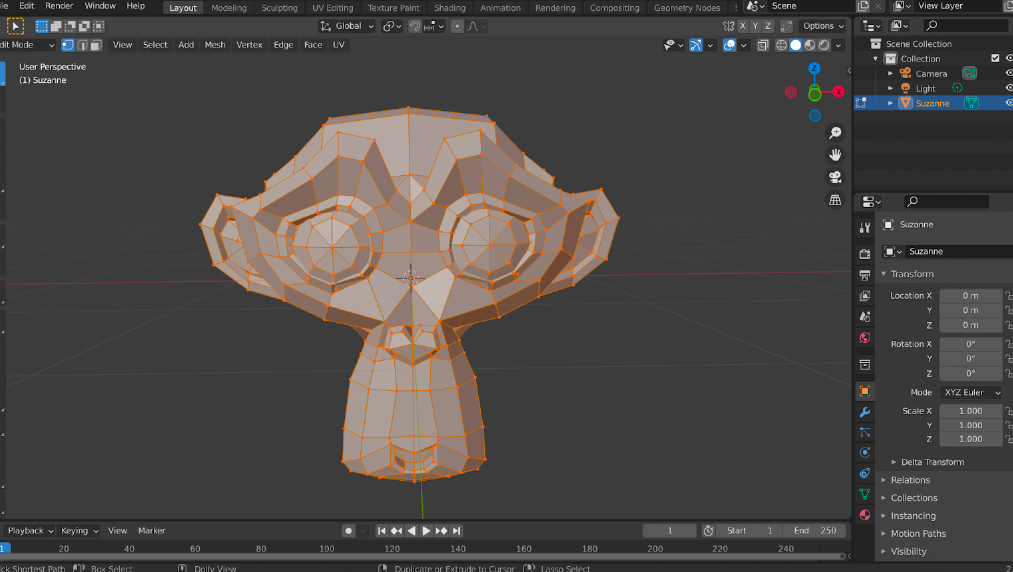 Based on these 3 elements, you can create almost any model you can imagine by adding edges, cutting faces, moving vertices around, etc. Some 3D programs allow you to use sculpting brushes that behave almost like hands molding clay, which makes the process of creating characters a lot more artistic. A character can have hundreds of different parts that are created separately and then brought together to form the final model.

Now this is a tricky bit that I had to wrap my head around for a good while. Once the general shape of your model is ready, it’s time to texture it.

Some programs like Mari allow you to paint directly onto the surface of the model with a brush. You can also project textures onto a model, just like you’d use a projector to project images onto a wall. Unfortunately, those methods can sometimes be unpredictable, and hard to manipulate into exactly what you want. Which is where UV mapping comes into play. 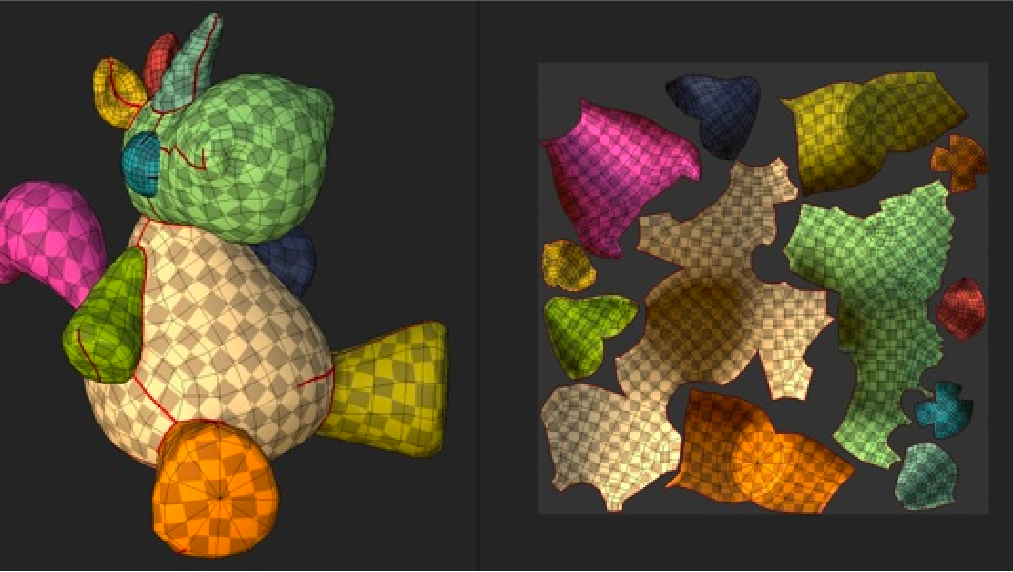 UV mapping is very much like being a seamstress. The purpose is to take the faces that make up a model and flatten them out to make pattern-pieces that can then have flat, 2D texture images assigned to them. This is done by selecting and ‘cutting’ edges to ‘open up the model’. It’s like taking a t-shirt and marking where the seams are before unstitching it and laying all the pieces flat.

Once the pieces of the model are laid flat, materials and image textures can be assigned to the model.

Materials are different from textures. A material encompasses the image texture, which is the colour attribute part of the material. But it has other attributes as well, like roughness and sheerness, and smaller details like bumps and grooves - called bump maps or normals.

Depending on the complexity of the model, you will probably have more than one material. For example, skin would be a material, leather another, fabric, plastic, silver, etc. Each separate material can be assigned to different parts of the model.

UV’s help when you have very specific details in your texture that you need to control. For example, freckles, or stripes on a t-shirt that you’d like to be horizontal instead of vertical. That’s when you go to your flattened-out patterns and adjust them to fit the texture images in the way you want them to.

Rigging is the process of turning your model into a puppet. It’s creating an internal skeleton, with joints and bones, that acts like a real skeleton would. Each bone has an area of influence on the model. So the knee joint would be set to affect the faces on the model that form the knee. This is called skinning, and it’s done by selecting each bone and painting the area of influence with a brush on the model. 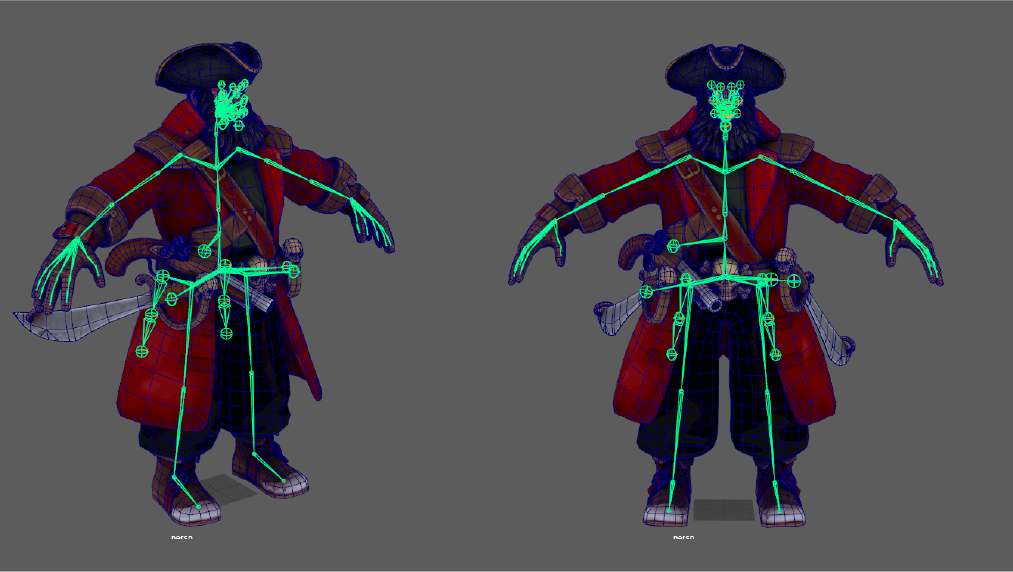 From there, controls are created for each bone, in an atomic hierarchy - from a control for the entire arm, to small controls for each joint in the finger. The arm control can move the fingers controls with it, but not the other way around. Same goes for the entire body.

Once the character is modelled, textured, and rigged, it is ready to be animated. This is usually done by setting keyframes, which are locked-in positions on a time frame. It’s telling the computer where each joint of the character needs to be at any given time in the timeline. 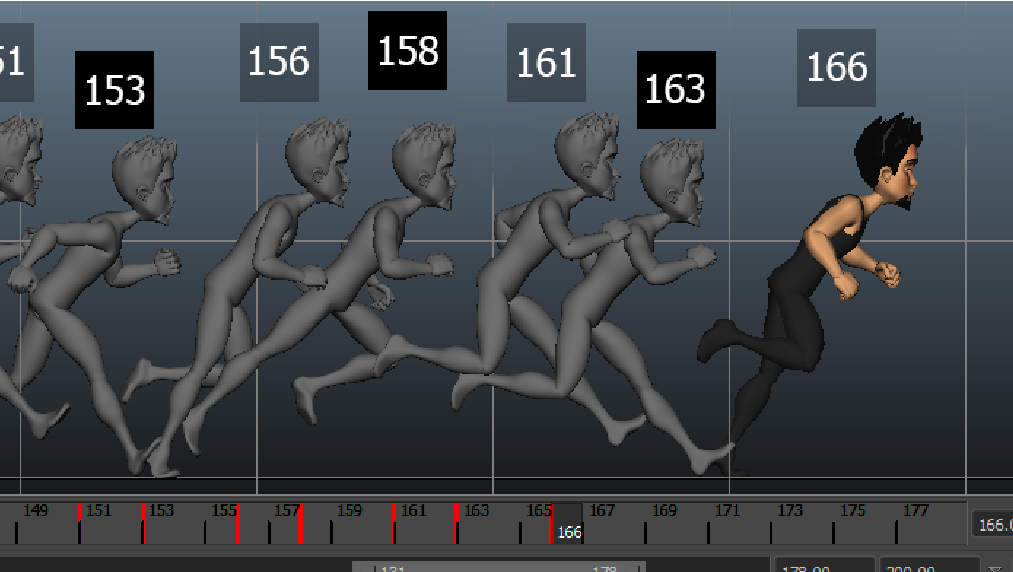 So a walk cycle, for example, will be composed of 4-5 different poses. The character is placed like a puppet in its first position, where a keyframe is set. Then the animator moves a bit further on the timeline and re-positions the character in its second pose, and sets a keyframe. And so on, until a walk cycle starts to take shape. Then it’s a matter of going in and tweaking the movement to make it feel natural and real.

Once the character is animated, it is time to dress the set up. Lighting, camera, background objects - they are all part of the scene set-up. 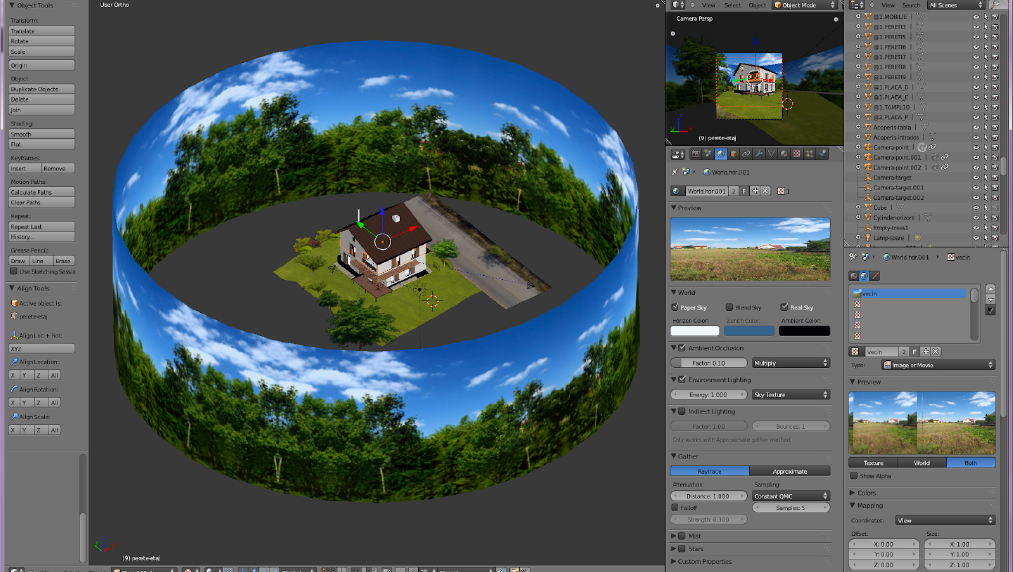 There are people out there who are experts at lighting, and that is their only job. It takes a lot of skill and an artistic eye to manipulate light in a way that makes a fake, 3D scene look real. Nowadays, the use of HDRI images has made the realistic look a lot easier to achieve, but lighting artists will always be needed.

The camera in 3D acts just like a camera in real life, where you can adjust its settings and even animate it to make it move like a real videographer would use it.

Each 3D program has its own rendering system. Whether it is Pixar’s Renderman, or Blender’s Cycles, all renderers work on the same principles. Rendering takes all the information from a scene (lights, textures, mass, etc.) and creates a flat, 2D image. It starts very pixelated at first, until the system slowly fills in the details to create a final, smooth picture. 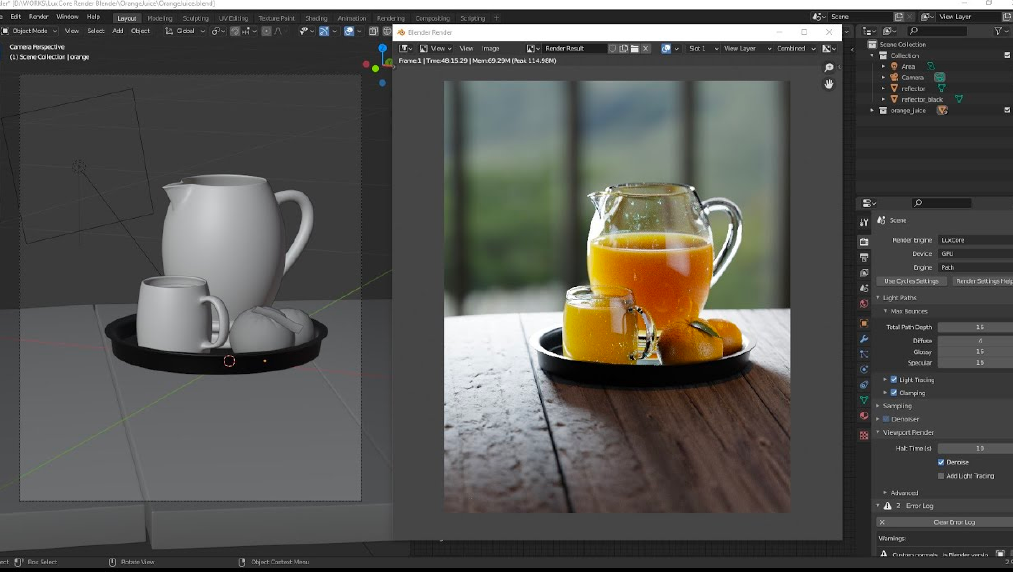 Rendering one frame can take anywhere from a few minutes up to a few days depending on the complexity of a scene. You can imagine how long just one second of animation would take to render when it requires at least 24 frames. Luckily, with the evolution of technology, rendering time has been cut significantly. And with software like Unreal Engine, it has become possible to view your final scene in real time, and even move around in your fully rendered world like it is real. 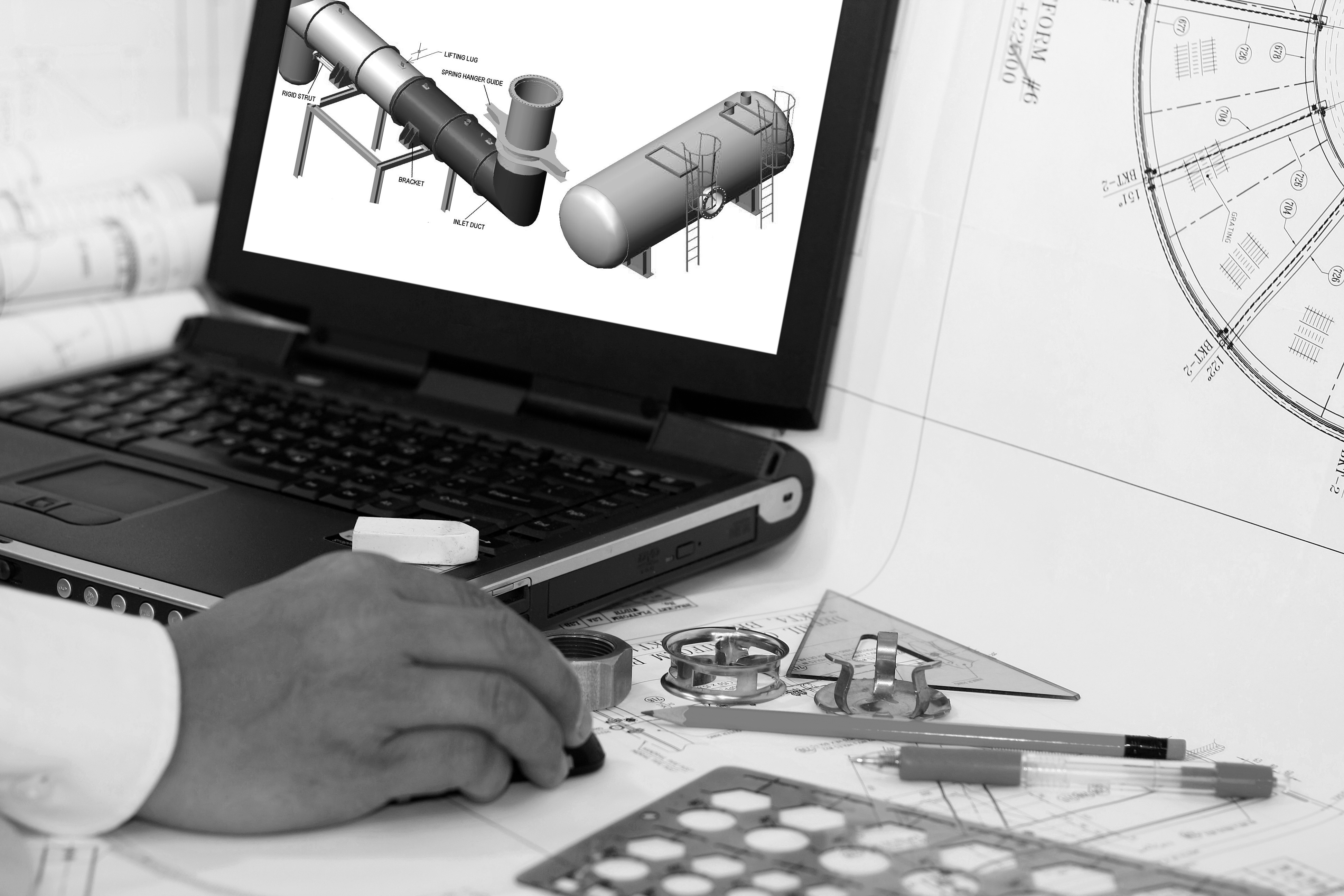 Now that is just scratching the surface but hopefully this blog has helped shed a light on the processes that go behind a final rendered animation. If you are looking for further material, Blender Guru has tons of free videos taking you through the entire process of creating a model, going through all the fundamentals of 3D. Join the donut squad; you’ll thank me later!

If you are looking for some 3D animation, why not have a cheeky sneak peek on our website to find out what we could help you with. And if you’re hungry for more animation or 3D related content, or just anything creative in general, check out our other blogs here.

She / her. Iulia is Rusty Monkey’s animation, illustration and 3D expert. Responsible for making everything beautiful, she also dabbles in graphic design and UX design. Among her credits is an animated music video for local parody heavy metal band Evil Scarecrow. A talented artist, she showcases her work on her Instagram channel. She usually spends most of her time in some random corner of the house with a drawing tablet and a pen, scribbling away. Cat obsessed. Professional house plant killer. Autumn lover. Maker of things.

Need help with your business?

How to use animation in your online marketing strategy

Animation in marketing: a beginner’s guide.

How to make a 3D animation

Using animation and video to explain your product or service

Why you should use more GIFs in your social media marketing